The majority of the Dead Sea Scrolls are religious works, divided on this website into "Biblical" and "Non-Biblical" compositions, with a special category for "Tefillin and Mezuzot". The non-literary records in the corpus (mostly papyrus manuscripts from sites other than the Qumran caves) are grouped into "Documents" and "Letters", and a small number of "Scribal Exercises". The "Unidentified Texts" are tiny fragments in such poor condition that they cannot be categorized. There are also "Multiple Compositions". In most cases, a manuscript label refers to a single text. However, sometimes a single label was assigned to more then one composition. In some cases, this is due to the re-use of a scroll in antiquity-- when writing was superimposed over existing text (a palimpsest) or there are separate texts written on the two sides of a scroll (recto and verso). Other cases of "multiple compositions" with a single label manuscript number reflect modern errors and disagreements about classifying fragments. 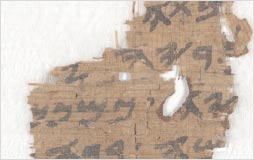 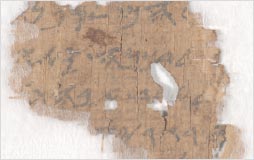 Occasionally, scholars mistakenly thought that different fragments came from the same manuscript and grouped them together. Sometimes the fragments are the same composition, e.g., the book of Leviticus, but originate from different copies. In such cases, the texts are given an extra letter to distinguish them, such as 4Q26, 4Q26a, 4Q26b, 4Q26c, which represent different copies of Leviticus that were placed together.

The literary compositions among the Dead Sea Scrolls are conventionally categorized according to their content or genre. Scholars differ in their opinions about specific categories and labels, and the terms used here are designed to help the user navigate this unique site rather than to contribute to the on-going and complicated scholarly debates. One text can have more than one label describing it.

Scripture (מקרא) – These manuscripts contain material now considered to be part of the Hebrew Bible. Every book is represented among the Dead Sea Scrolls, except the book of Esther. These are the oldest known copies of biblical works.

Translation of Scripture (תרגום מקרא) – These are translations of scriptural texts into Aramaic and Greek.

Tefillin ("phylacteries") and Mezuzot are ritual objects, small slips of parchment containing excerpts of biblical texts in keeping with
Deut 6:6-9:

6And these words, which I command you this day, shall be upon your heart…8 you shall bind them for a sign upon your hand, and they shall be for frontlets between your eyes... 9And thou shall write them upon the door-posts of your house, and upon your gates.

Tefillin (תפילין) - These parchment slips, folded and placed in capsules, are understood to be the "frontlets between your eyes." About two dozen tefillin slips were recovered from the Qumran caves, and additional tefillin were found at Wadi Murabba'at, Nahal Hever, and Nahal Se’elim. 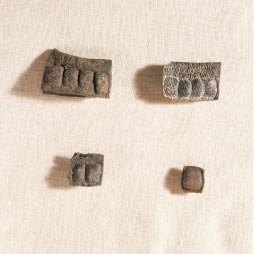 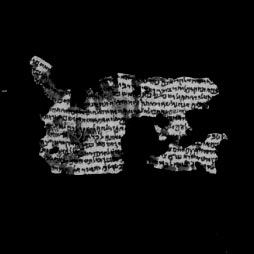 Top: Image of tefillin cases from Qumran Cave 4 1cm x 2-3 cm
Bottom: 4Q135 4QPhylactery H, text of tefillin 2.5 cm x 4 cm
Photos: Shai Halevi
They are identified by the biblical passages they contain, and some special scribal features such as tiny script. The texts are the same as those required by later rabbinic halakha that has been passed down to modern Jewish practice, but some contain additional biblical passages. Since the Qumran tefillin are the only examples we have from the Second Temple period, we cannot know whether their distinctive features reflect the traditions of a specific community or whether they represent a more widespread tradition.

Mezuzot (מזוזה) - These are placed on doorposts of houses. Eight mezuzot were found in the Qumran caves, and one was discovered at Wadi Murabba'at. The biblical passages on the mezuzot often include the same texts that appear on doorposts of Jewish homes today.

Non-biblical compositions refer to texts that are not considered part of the modern Hebrew Bible. Some may have been considered sacred by their contemporary writers and readers.

Apocrypha (אפוקריפה) – The term "Apocrypha" is used here to refer to the specific collection of books considered to be canonical in the Catholic and Eastern Orthodox traditions, but not part of the Hebrew Bible or Protestant canon. Three works of the Apocrypha are found among the Dead Sea Scrolls: Ben Sira (also known as the Wisdom of Ben Sira, Sirach, or Ecclesiasticus), the book of Tobit, and the Epistle of Jeremiah.

Calendrical Texts (חיבורים קלנדריים) – "Calendrical texts" found in the Qumran caves rely mainly on solar rather than lunar calculations. The calendars are useful sources of information about festivals and priestly courses (mishmarot). The cryptic script (a type of unusual Hebrew writing) of some of the calendars may imply that the information was secret and esoteric. These manuscripts are especially valued for their orderly and systematic lists of days and months, enabling scholars to recreate missing pieces of the calendar. The most prominent calendar consists of 364 days divided into 4 seasons of 13 weeks each.

Exegetical Texts (חיבורים פרשניים) – The term "Exegetical texts" used here refers to texts that analyze and interpret biblical works through explicit reference. The most well-known of these texts are the pesharim; others include a "halakhic midrash" and commentaries on Genesis.

Pesher (פשר) – This type of exegetical literature applies biblical prophecy to the history and experience of the sectarian community known as the Yahad, with a special focus upon the End of Days. These commentaries are easily recognized by the use of the word pesher in the written formulas that link the citation of the biblical text to its interpretation.

Historical Texts (חיבורים היסטוריים) – Historical texts relate to historical events; some of these works feature moral and theological interpretations of the events. These fragments mention historical people such as Queen Salome and Greek kings, and many of the events described are set in the midst of war and rebellion.

Parabiblical Texts (חיבורים על המקרא) – The term "Parabiblical texts" is used here to refer to texts that relate to scriptural works by re-telling, expanding upon, or embellishing biblical stories or legal texts. Examples are the Genesis Apocryphon, Enoch, and the Temple Scroll. Some books categorized as parabiblical, e.g., Jubilees or the Aramaic Levi Document, may have been given scriptural status by certain groups in ancient times.

Poetical/Liturgical Texts (חיבורים שיריים וליטורגיים) – Most of the poems and hymns among the Dead Sea Scrolls are closely related to biblical poetry. Many also incorporate themes and expressions from later periods, most notably sectarian hymns such as the Hodayot. Some texts would have been used for personal study or reflection, while others were intended for more formal liturgical use, such as Daily Prayers and Festival Prayers, and the Songs of the Sabbath Sacrifice.

Sapiential Texts (חיבורים חכמתיים) – Among the Dead Sea Scrolls are works that continue the sapiential, or wisdom traditions, found in the biblical books of Proverbs, Job, Ecclesiastes and some Psalms, and in the Apocryphal works of Ben Sira and the Wisdom of Solomon. These works offer practical advice about daily life, alongside intellectual inquiry about the world and humanity. Qumran Scrolls wisdom texts, such as Instruction and Mysteries, combine the practical and intellectual themes with apocalyptic concerns, and occasionally relate to legal matters as well.

Sectarian Texts (חיבורים כיתתיים) – The "Sectarian texts" use unique terminology to describe the special theology, worldview, and history of a particular group, which called itself the Yahad ("Community"). The core texts outline the rules and regulations of the Yahad and emphasize the End of Days, which the Community viewed as imminent. Scholars used to attribute all of the Qumran Scrolls to the Essenes, one of the three major Jewish sects in the Second Temple period. Most now agree that the corpus represents the writings of related, evolving communities rather than a single sect. Even the texts labeled as sectarian were likely to have been composed by multiple groups, within and outside of the Community. Three of the original seven scrolls found in Cave 1 near Qumran were instrumental in identifying sectarian texts and remain some of the most well-known manuscripts: the Community Rule (Serekh HaYahad), the Scroll of the War of the Sons of Light Against the Sons of Darkness, and the Habakkuk Commentary (Pesher Habakkuk).

Bar Kokhba Letters (איגרות בר כוכבא) – Fifteen military letters were found stored in a leather waterskin in Cave 5/6 of Nahal Hever, known as the Cave of the Letters. All of the letters in this bundle were written by men who were involved with the administration of Shim‘on b. Kosiba, the leader of the Bar Kokhba Revolt, and most were written in Shim‘on’s name.

Archive of Babatha (ארכיון בבתא) – The personal archive of Babatha, apparently a refugee during the Bar Kokhba Revolt, was found in Cave 5/6 of Nahal Hever, known as the Cave of the Letters. These thirty-five financial documents, including marriage contracts, land deeds, and bills of sale, had been wrapped in a package stored inside a leather purse and placed in a concealed crevice inside the cave, presumably for safekeeping for future retrieval. Most of the Babatha documents are well preserved and feature explicit dates, ranging from 94-132 ce. The archive includes documents written in Aramaic, Nabatean and Greek

Archive of Eleazar ben Shmuel (ארכיון אלעזר בן שמואל) – In addition to the Bar Kokhba and Babatha archives, the Cave of the Letters also yielded another small collection of documents. Five contracts belonging to Eleazar the son of Shmuel, a farmer from Ein Gedi, were found inside a leather purse concealed in a crevice alongside the Babatha archive. An additional papyrus document belonging to Eleazar was found hidden inside a reed.

Alleged Qumran Documents (תעודות לכאורה ממערות קומראן) – Some of the documents sold by Bedouin to the Rockefeller Museum were attributed to Qumran caves but may actually have been found elsewhere. In at least one of these cases, a Qumran Cave origin does in fact seem likely. One fragment is an account in Greek that was probably written on the back of a Qumran Scroll.