While the majority of Dead Sea Scrolls were written in Hebrew, the collection also includes many Aramaic and Greek texts, as well as some Arabic texts and a small number of Latin fragments.

Dead Sea Scrolls written in Hebrew include biblical texts, non-biblical literary works, and documents such as deeds and letters. While some documents contain specific dates, most are dated on the basis of paleographical analysis (the study of the development of scripts over time), and sometimes with carbon-14 dating. These texts illustrate the vitality of the Hebrew language in ancient Judea.

Scholars commonly speak of "Qumran Hebrew" as a literary Hebrew dialect. Some Scrolls from the Qumran caves have certain distinctive features, such as the use of "plene" spelling (using the letters א, ה, ו, י to indicate vowels), which scholars have identified as "Qumran Scribal Practice." The documents from the refuge caves of the Judean Desert are written in a less formal Hebrew.

For some very fragmentary manuscripts found in the refuge caves, there is no way to determine whether the language of the text is Hebrew or Aramaic. Several works from Qumran, such as Enoch and Tobit, are preserved in both Aramaic and Hebrew versions.

Aramaic was the Near East "lingua franca" of the Biblical period, and it is still used among several Christian communities today. Just like the Hebrew Scrolls, the majority of Aramaic manuscripts were written in standard “square" ("Jewish”) script. Represented in the Dead Sea Scrolls are a variety of Aramaic dialects: Official Aramaic, Jewish Palestinian Aramaic, Nabatean, and Christian Palestinian Aramaic.

Official Aramaic – Also known as Standard Aramaic or Imperial Aramaic, this language was in use from the 7th to 3rd centuries bce. Examples can be seen in sections of the biblical books of Ezra and Daniel and in the Samarian papyri from Wadi Daliyeh. 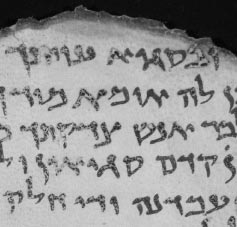 11Q10
11Q Targum Job, Aramaic Photo: Shai Halevi represented in several biblical translations, and in a number of non-biblical works, especially parabiblical works such as the Genesis Apocryphon and the Aramaic Levi Document. Bar Kokhba letters and 2nd century ce papyri documents recovered from the Judean Desert refuge caves show a different variation of Jewish Palestinian Aramaic that is likely closer to the spoken language at the time.

Nabatean Aramaic – Used in the Arabian kingdom of Nabatea (east and south of Judea) from the beginning of the 3rd century bce, Nabatean Aramaic incorporated Arabic features, especially vocabulary. Examples can be seen in certain Nahal Hever documents and the Seiyal Collection.

Christian Palestinian Aramaic – Examples can be seen in several texts from Khirbet Mird.

All of the Greek texts among the Dead Sea Scrolls are written in koine, the common dialect of the post-classical Hellenistic and Roman worlds and the New Testament language. A total of 27 Greek manuscripts have been identified from the Qumran caves. This includes all remains of 19 papyri found in Qumran Cave 7, and several Greek manuscripts preserved in Cave 4, made up of mostly biblical fragments. While the majority of the Cave 7 manuscripts cannot be identified, exceptions are a copy of Exodus and an Apocrypha work, the Epistle of Jeremiah. Attempts to identify some Cave 7 Greek fragments as Enoch are subject to debate, while attempts to identify fragments as New Testament have proven unsuccessful.

The majority of Greek manuscripts found at other Judean Desert sites are papyri documents from the Roman era. Most were recovered from the refuge caves of the Bar Kokhba Revolt (132-135 ce). Several Jewish Greek documentary papyri dating to before 74 ce were found at Masada. Among the non-documentary texts is the well-preserved translation of the Twelve Minor Prophets Scroll found at Nahal Hever, dating to the first century ce. Another unusual find is a text in iambic trimeters from Wadi Murabba'at.

Latin papyri found at Masada belonged to Roman soldiers stationed there after the suppression of the Jewish Revolt in the 70s ce. The papyri include: a soldier's payslip, a list of hospital supplies, and a scrap with a quotation of Virgil's Aeneid. Also found here was a bilingual list of Latin and Greek Jewish names. In addition, several Latin text fragments from the 1st-2nd centuries ce were found at Wadi Murabba'at.

Over one hundred Arabic manuscripts, mostly from the 7th and 8th centuries ce, were discovered at Khirbet Mird. The trove is the largest collection of Arabic papyri found outside Egypt. Additionally, five Arabic texts written on paper were found at Wadi Murabba'at: a receipt, a contract, and three magic texts dating to the 10th century ce.