Since the discovery of the Dead Sea Scrolls, scholars and conservators have been concerned with their conservation, preservation and documentation. For over 2,000 years, the Scrolls were preserved in a relatively stable environment: the caves of the Judean Desert. Removing the fragile Scrolls from their caves not only interrupted their environmental stability, but also subjected the Scrolls to damage through human handling. In the early decades, scholars mishandled the Scrolls unknowingly, causing irreversible damage as they attempted to piece together the complex manuscript puzzle of thousands of fragments. Today, the Israel Antiquities Authority (IAA) adheres to a strict protocol of care to ensure the long-term preservation of the Scrolls. The current digitization project began as a conservation effort to develop a state-of-the-art monitoring system for the Scrolls. The exceptional technology of the Leon Levy Dead Sea Scrolls Digital Library will also enable scholars to study the fragments without physically handling them, safeguarding the texts for future generations.

Situated 400 meters below sea level, the constant arid climate of the Judean Desert and the stable humidity and temperature within the caves were likely the major factors contributing to the preservation of the manuscripts for two millennia. Removal from the Judean Desert caves starting in 1947 placed the Scrolls at great risk of deterioration. Other factors contributing to the Scrolls’ vulnerability include:

The first scholars used adhesive tape to join Scroll fragments and seal cracks. They placed the fragments loosely between plates of window glass. Unfortunately, the aging of the adhesives and the pressure of the glass caused the skins to darken and their edges to gelatinize, rendering some texts illegible.

In the 1960s and 1970s, interventions were undertaken to undo previous damage inflicted on the Scrolls. Glass plates were opened and attempts were made to remove the adhesive tape and stains. However, the methods employed caused even further damage to the fragments.

1950s/1960s: Fragments are sorted, ascribed to different manuscripts and encased within more than 1200 glass plates. Various stages of the arrangements of fragments on the glass plates are documented using infrared film. These infrared negatives are referred to as PAM (Palestine Archaeological Museum) negatives and their archive numbers range from 40.059 to 44.361.
Early 1960s: First conservation intervention and report about the fragments’ state of preservation by the British Museum.
1967: Inventory of glass plates containing fragments. Plates numbered from 1 to 1261. 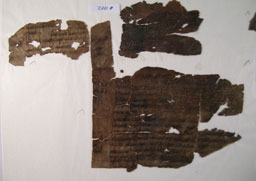 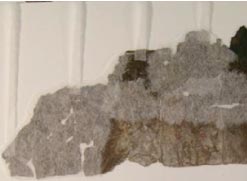 Left: In the 1960s, British Museum Leather Dressing was applied

Right: In the 1970s, rice paper and perspex glue were used to repair fragments 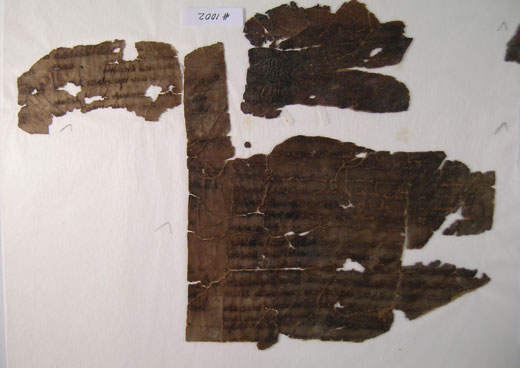 Top: In the 1960s, British Museum Leather Dressing was applied
Bottom: In the 1970s, rice paper and perspex glue were used to repair fragments

1970s: Treatment of hundreds of the glass plates by the Israel Museum.
1989: Complete inventory of Dead Sea Scrolls fragments, including photographs, museum inventory numbers and publication status.
1991: The IAA, assisted by international experts in conservation and preservation, begins to document and treat the thousands of Scroll fragments belonging to approximately 900 manuscripts. 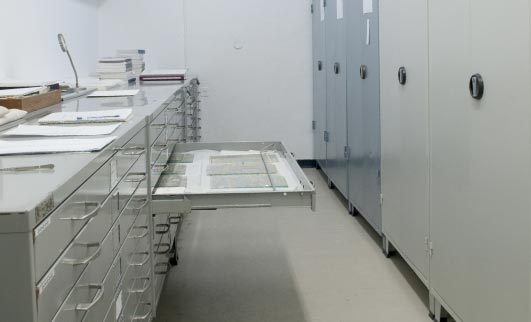 The IAA constructed an additional climate-controlled storage facility to house the invaluable infrared PAM negatives—photographs that document the Scrolls fragments as they were found in the 1950s and 60s, which served as the basis for the official publication of the Scrolls. 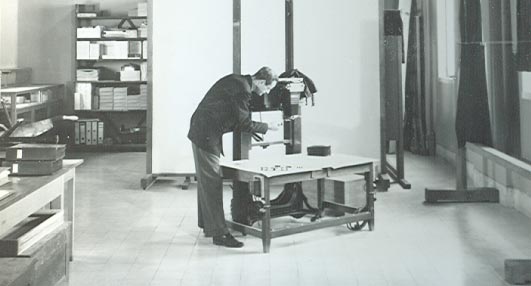 One of the features in the facility is its climate-control system. Experts monitored conditions of humidity, temperature, light, and darkness in the Scrolls’ original home, the Judean Desert caves. The idea was to create an environment that would mimic the conditions of the caves, maintaining the averages of humidity and temperature that had preserved the Scrolls for 2,000 years.

The IAA constructed an additional climate-controlled storage facility to house the invaluable infrared PAM negatives—photographs that document the Scrolls fragments as they were found in the 1950s and 60s, which served as the basis for the official publication of the Scrolls.

The IAA established a designated conservation laboratory where conservators exclusively trained for this conservation project began recording and treating the thousands of fragile manuscript fragments. They set out on the lengthy and ongoing process of removing the adhesives from previous treatments in the 1950s to 1970s. 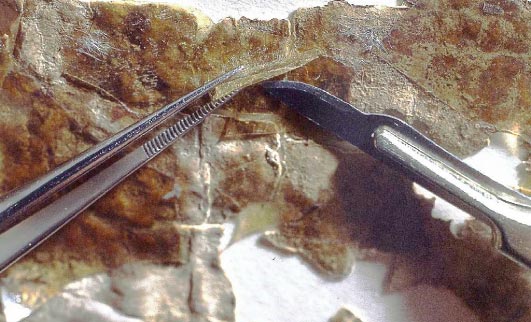 Removal of adhesive tape with tweezers

Each of the thousands of fragments needs individual attention as well as regular treatment and maintenance. The conservators record detailed descriptions of the condition of every fragment; no matter how minuscule, each one is then photographed and mapped, and information about their condition is entered into the IAA database.

The IAA is constantly consulting with conservation experts regarding conservation methods of the Scrolls. In March 2012, the IAA invited an international committee of parchment and papyrus experts to reevaluate its work procedures and to try to solve unaddressed issues such as fragments still trapped within glass plates, corrosion of the ink and delamination of parchment. 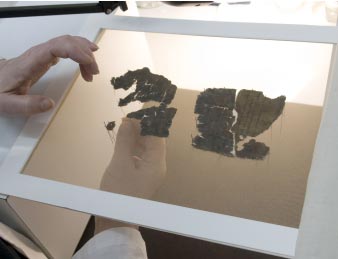 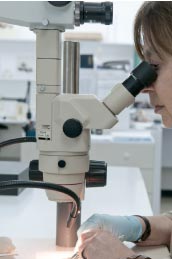 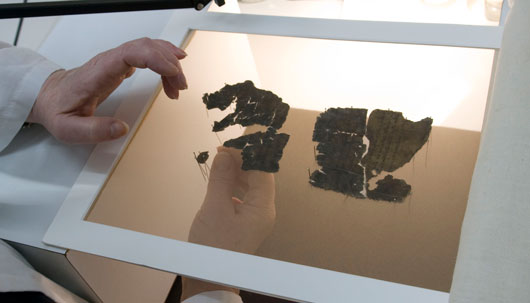 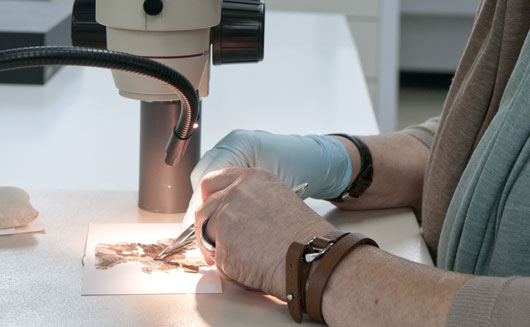 Conservators working at the IAA's Dead Sea Scrolls conservation laboratory
Photo: Shai Halevi
The IAA is constantly consulting with conservation experts regarding conservation methods of the Scrolls. In March 2012, the IAA invited an international committee of parchment and papyrus experts to reevaluate its work procedures and to try to solve unaddressed issues such as fragments still trapped within glass plates, corrosion of the ink and delamination of parchment.

Worldwide public interest in the Scrolls has created a demand for the exhibition of this universal cultural heritage. The IAA works to showcase the Scrolls internationally, while placing major emphasis on adequate climatic conditions and safety.

The IAA began to exhibit the Scrolls in the mid-1990s in the United States Library of Congress. The Preservation Directorate of the Library of Congress aided the IAA in devising designated capsules in which the traveling Scrolls are encased to ensure their climatic stability during transportation and exhibition.

The Scrolls have been exhibited in over thirty venues worldwide, from the Americas to Japan and from Europe to Australia. Each venue is required to abide by the most stringent protocols, e.g., maintaining climate-controlled showcases and monitoring light exposure. The Scrolls are exhibited on a rotational basis; any Scroll on display for a period of three months must “rest” for at least a year before traveling again. There is constant demand for these Dead Sea Scrolls exhibits around the world. 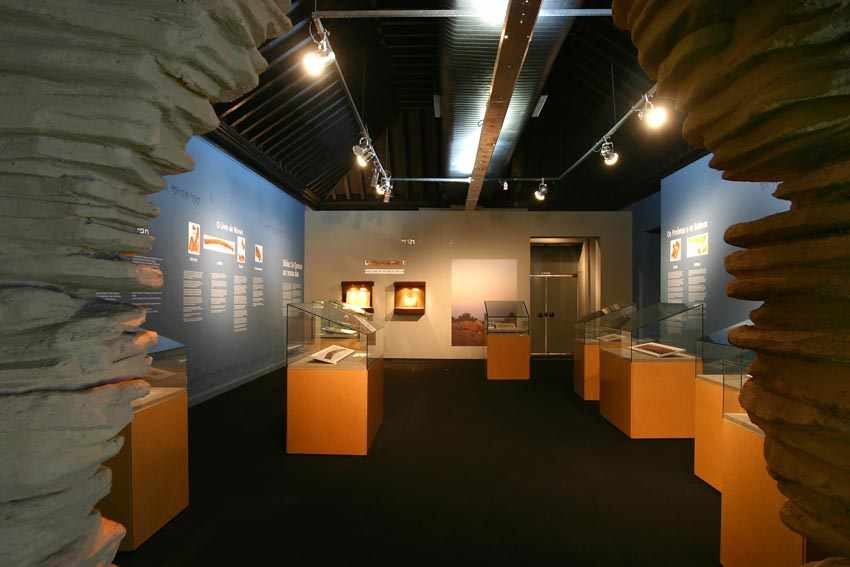 In 2007, the IAA assembled an international committee of experts to advise on the use of spectral imaging to document the Scrolls for monitoring their well-being. By 2008, the IAA had built a dedicated studio and conducted a pilot to determine the scope of the project with respect to time, work procedures, manpower, technologies and funds. Dr. Gregory Bearman, formerly a principal scientist at the Jet Propulsion Laboratory at the California Institute of Technology, was named the consultant for imaging technologies, while Simon Tanner from King’s College London headed the pilot’s data management.

Prompted by the committee's early efforts and several successful pilots, the IAA is now engaged in an advanced, large-scale digitization project, which was initiated as part of the Scrolls’ conservation efforts. The project, named the Leon Levy Dead Sea Scrolls Digital Library, which is generously supported by the Leon Levy Foundation and the Arcadia Fund, includes the monitoring of the Scrolls and the creation of highest-quality color and infrared images. With the publication of the Scrolls formally completed, the IAA intends to upload all the digitized Scroll images online with transcriptions, translations, commentaries and detailed bibliography, allowing for free access to all.