The most well-known texts among the Dead Sea Scrolls are the ancient religious writings found in eleven caves near the site of Qumran. Discoveries from additional sites yielded mostly documents and letters, especially papyri that had been hidden in caves by refugees from wars. While some of these writings survived as nearly intact scrolls, most of the archive consists of thousands of parchment and papyrus fragments.

The Qumran Caves Scrolls contain significant religious literature. They consist of two types: “biblical” manuscripts—books found in today’s Hebrew Bible, and “non-biblical” manuscripts—other religious writings circulating during the Second Temple era, often related to the texts now in the Hebrew Bible. Of this second category, some are considered “sectarian” in nature, since they appear to describe the religious beliefs and practices of a specific religious community. 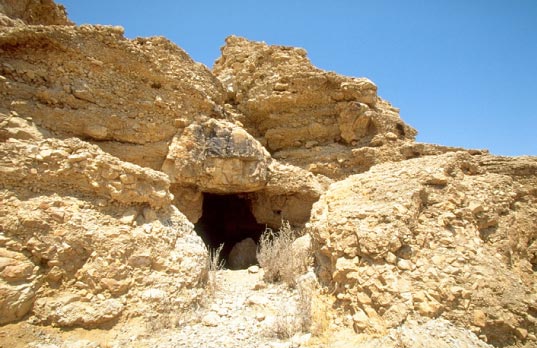 The entrance of Qumran Cave 11
Photo courtesy of: Alexander Schick

Scroll dates range from the third century bce (mid–Second Temple period) to the first century of the Common Era, before the destruction of the Second Temple in 70 ce. While Hebrew is the most frequently used language in the Scrolls, about 15% were written in Aramaic and several in Greek. The Scrolls’ materials are made up mainly of parchment, although some are papyrus, and the text of one Scroll is engraved on copper.

About 230 manuscripts are referred to as “biblical Scrolls”. These are copies of works that are now part of the Hebrew Bible. They already held a special status in the Second Temple period, and were considered to be vessels of divine communication. Evidence suggests that the Scrolls' contemporary communities did not have a unified conception of an authoritative collection of scriptural works. The idea of a closed biblical “canon” only emerged later in the history of these sacred writings.

Among the Scrolls are partial or complete copies of every book in the Hebrew Bible (except the book of Esther). About a dozen copies of some of these holy books were written in ancient paleo-Hebrew (the script of the First Temple era, not the standard script of the time).

Many biblical manuscripts closely resemble the Masoretic Text, the accepted text of the Hebrew Bible from the second half of the first millennium ce until today. This similarity is quite remarkable, considering that the Qumran Scrolls are over a thousand years older than previously identified biblical manuscripts.

Strikingly, some biblical manuscripts feature differences from the standard Masoretic biblical language and spelling. Additions and deletions in certain texts imply that the writers felt free to modify texts they were copying.

The Qumran Caves Scrolls preserve a large range of Jewish religious writings from the Second Temple period, including parabiblical texts, exegetical texts, hymns and prayers, wisdom texts, apocalyptic texts, calendrical texts, and others. Some of the works discovered among the Dead Sea Scrolls were known previously, having been preserved in translation since Second Temple times. The term "Pseudepigrapha" was used for these works, such as the book of Jubilees which was known in Ethiopic and Greek versions before being found in Hebrew in the Qumran caves. Many other non-biblical works were previously unknown.

A primary common factor among the selection of compositions found in the Qumran caves is the fundamental importance of religion.

Scholars agree that some of this literature was valued by large segments of the Jewish population, while other works reflect the beliefs of specific sub-groups. There is disagreement, however, about many other aspects of these texts, including which communities are represented and how those communities may have interacted with one another. 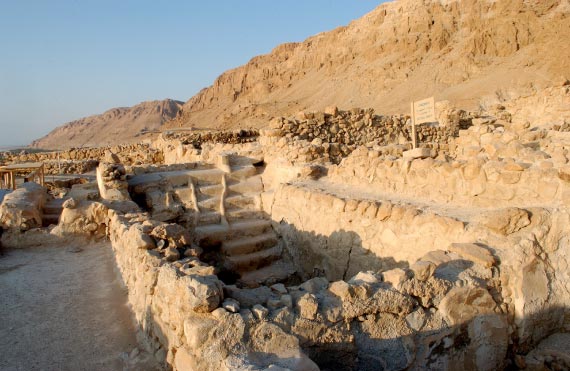 Many of the 'sectarian' scrolls found in the Qumran caves emphasize spiritual purity and ritual purification through immersion in a ritual bath or 'mikveh' like the one shown here from Khirbet Qumran
Photo: Tsila Sagiv

A quarter of these non-biblical manuscripts are labeled “sectarian,” and are composed of material that seems to reflect the life and philosophy of a specific community. These core texts consist of eschatological biblical commentaries, apocalyptic and liturgical works, and regulations that govern community life. In the early days of Scrolls research, scholars attributed all of the Qumran scrolls to the Essene community, one of three main Jewish sects described in ancient sources. In recent years, however, this consensus has been challenged and modified, though many scholars still maintain a link between the Essenes and the Dead Sea Scrolls.

Dead Sea Scrolls discovered outside of the Qumran caves range from as early as the First Temple period (eighth century bce) to as late as the 11th century ce. Collections include the fourth-century bce Samaritan Aramaic papyri from Wadi Daliyeh and the Arabic manuscripts from Khirbet Mird (7th–8th centuries ce). Most of the manuscripts are Jewish texts that were written during the Roman era. Among these, the finds from Masada and the Hebrew, Aramaic, Nabatean, and Greek documents from the Bar Kokhba Revolt are especially valued by scholars.

Silver tetradrachm from the Te'omim Cave, 134-135 ce Obv.: Façade of the Jerusalem Temple. Inscription: "Shim'on" Rev.: Bundle of Lulav and Etrog. Inscription: "For the Freedom of Jerusalem"
Photo: Clara Amit

The "Bar Kokhba refuge caves" preserved numerous documents including financial, military, legal, administrative, and personal records, as well as some religious texts including biblical Scrolls. Brought to the caves by refugees seeking haven from the turmoil of the Bar Kokhba Revolt (132-135 ce.), 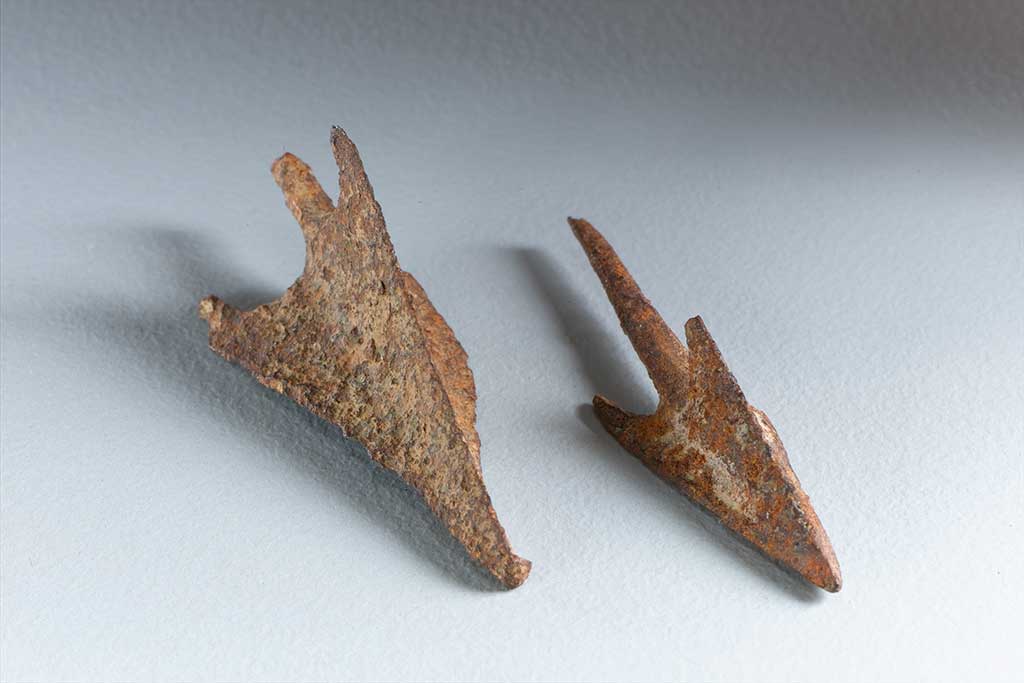 Arrowheads from Nahal Hever, Roman Period
Photo: Miki Koren they contain clues to the economic and personal hardships endured by the refugees. Texts from the caves include letters to and from the leader of the Bar Kokhba Revolt. Since many of the documents are dated, they are of great significance for the archaeology of the Roman and Talmudic periods

The biblical Scrolls from the refuge caves are significant for textual criticism because they are equivalent to the Masoretic (Hebrew Bible) Text, which suggests that the biblical text was stabilized by the second-century ce. The religious texts discovered here also include tefillin, a mezuzah, a literary text fragment referring to a prayer for Zion, and a well-preserved Scroll of the Twelve Minor Prophets in Greek.